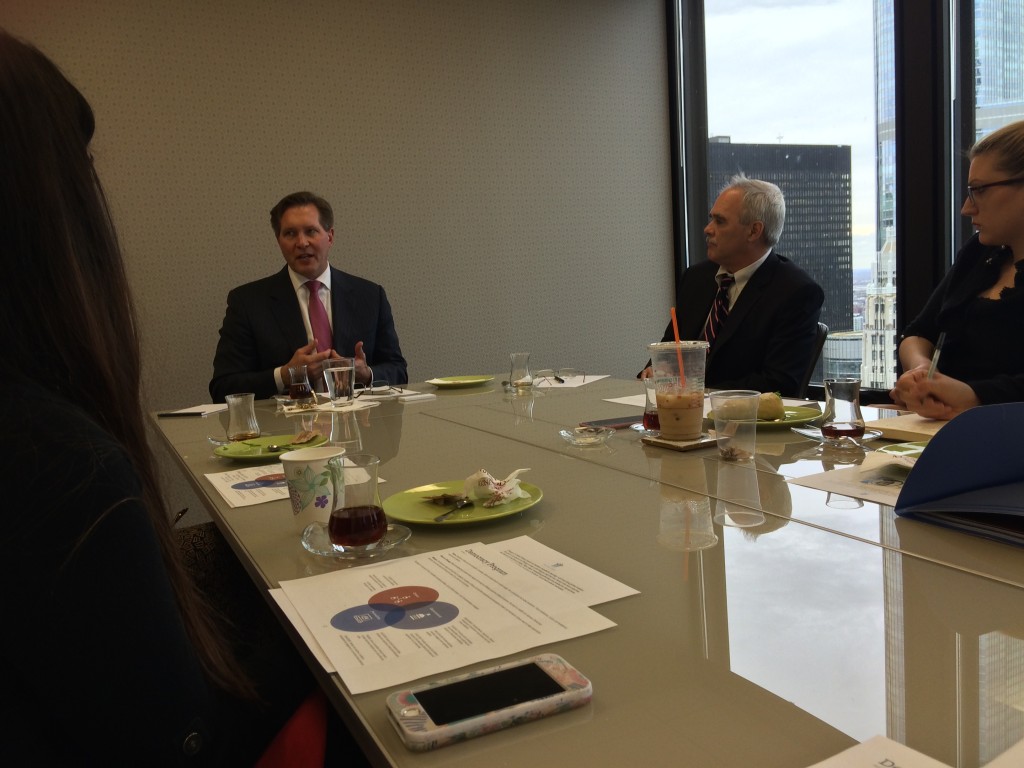 On November 18th, 2015, Niagara Foundation had the honor of hosting John Sirek, the director of the Democracy Program at the Robert R. McCormick Foundation. Mr. Sirek joined us for a roundtable discussion, during which he described the McCormick Foundation and shared his experience of having worked at the organization for nearly sixteen years. 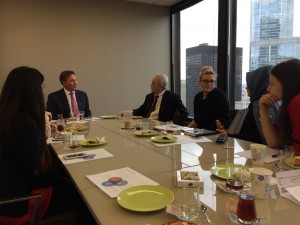 After this brief overview, Mr. Sirek elaborated on the Democracy Program, which is divided into three subcategories, namely, civics, government, and journalism. “Democracy,” Mr. Sirek noted, “Is something you need to study and engage in.” This sentiment superbly characterizes the civic education program, which supports a variety of initiatives, such as Illinois Democracy Schools that was organized in conjunction with the Illinois Civic Mission Coalition. The Democracy Schools, which currently number 42 Illinois high schools, are given the tools to assess and improve their ability to foster civic understanding within their student body. The McCormick Foundation also partnered with Chicago Public Schools to launch the global citizenship initiative, which brings civics courses and student voice committees to high school juniors and seniors. Particularly dear to the heart of the Niagara Foundation was Mr. Sirek’s comment that interfaith youth can gather across cultures and religions to effectively work together. Thanks to this project, Illinois is no longer one of the ten states that do not require civic coursework to receive a high school diploma.

Next, Mr. Sirek discussed the government section of the Democracy Program and provided several examples of ways in which government transparency and efficiency can be improved. For instance, redistricting is a partisan process, which the McCormick Foundation believes should be handled by an objective third party. The foundation aims to have this proposal placed on the 2016 ballot. Mr. Sirek also talked about the redundancy of certain government levels, mentioning that it is not a rare case for too many firemen to respond to the same call. 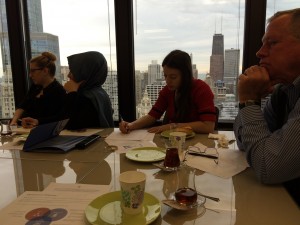 Last but not least, Mr. Sirek described the importance of journalism, which, in his eyes, is akin to a fourth branch of government because it serves an oversight role by “lifting up what’s well and pointing out what’s wrong.” The journalism program focuses on projects such as instituting journalism education in high schools and colleges and providing journalists with professional development. He noted that high school journalism instructors are often English teachers with no formal journalism training, an issue that the foundation is working to address.

The discussion concluded with a Q&A session. We cannot overstate our appreciation for the time that John Sirek shared with us to talk about the McCormick Foundation, and we look forward to our continued relationship with Mr. Sirek as a member of our Chicago Global Family.