Rainer Hermann began his February 2nd discussion, hosted by Niagara Foundation and University of Chicago’s International House, by describing a building: “Six times the size of the White House,” he told the audience, “over a thousand rooms, with a Central Command modeled on the one in your White House.” He was referring to Ankara’s new White Palace, completed in October under the direction of Turkish President Recep Tayyip Erdogan. The massive new compound, noted Hermann, was just one aspect of Erdogan’s increasingly authoritarian rule, one that has raised profound questions about the future of Turkey in the Middle East. “Who is this Erdogan,” he asked the audience, “and what does he want?”

Dr. Hermann is in an ideal position to answer that question. As a Middle East correspondent with Germany’s Frankfurter Allgemaine Zeitung, he has covered Turkish politics since the early 1980s, and lived in Istanbul himself from 1991 until 2008.  This period saw the rise of Turkish political Islam in the form of Erdogan’s AKP Party, as well as rapid economic growth and changes within Turkish society.  Dr. Hermann’s latest book, Where is Turkey Headed?, explores how these changes will shape Turkey’s future.

Outlining this topic at the University of Chicago’s International House, Dr. Hermann credited Erdogan and the AKP for moving Turkey beyond a moribund political environment. For much of the 20th Century, secular elite “White Turks” were pitted against pious, rural “Black Turks.” “That ideology was outdated,” he told the audience. “Internal conflicts could not be solved. Turkey was poor.” The 2002 arrival of the AKP party, he argued, meant nothing less than a “complete reset of Turkish politics.” For much of the 2000s, Erdogan and the AKP focused on practical, rather than ideological concerns. The economy grew, and Turkey’s democracy became fairer and more inclusive. “Erdogan, in the first few years, did the right thing.”

However, recent years have seen a fundamental shift in Erdogan’s governing style.  Dr. Hermann saw three early phases in the President’s development: A young Islamist, a pragmatic mayor of Istanbul, and a reform-minded Prime Minister.  The fourth phase began in 2007, when the military declined to intervene in a heated election (as it had in the past), and the judiciary nearly closed the AKP Party. “From then on,” Hermann explained, “Erdogan did not show any leniency to his critics.”

Dr. Hermann pointed to many anti-democratic policies under “Erdogan four:” a violent crackdown on the 2013 Gezi Park protests, a “witch hunt” of Hizmet members, suppression of a recent corruption investigation into his close confidantes and, of course, his massive new palace.  Not mincing words, Dr. Hermann compared Erdogan’s authoritarian style to that of Russian President Vladimir Putin.

This political crackdown comes at a time when Turkey faces major economic and foreign policy challenges. Dr. Hermann argued that, like many developing economies, Turkey risks falling into the “middle-income trap:” an inability to join the ranks of first-world countries  Turkey’s rapid economic growth appears to have stalled, and Erdogan is “lucky that oil prices are down.” Dr. Hermann sees a need for major structural reforms, but is doubtful that the AKP will carry them out. 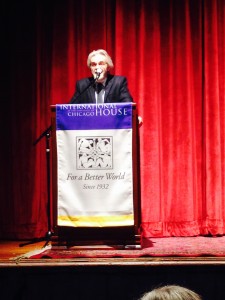 Yet Dr. Hermann saw Turkey’s greatest challenges beyond its own borders. He identified “two decisive factors” in Turkey’s region with profound implications for its future:

How Turkey responds to these challenges, concluded Dr. Hermann, will depend on if and how Erdogan re-invents himself. Dr. Hermann described the President as a “shrewd politician,” and sees a new phase to his rule–an “Erdogan five”–as entirely possible. In the near future, such a change in leadership style may be Turkey’s best hope; even many Hizmet members continue to vote for the AKP, and none of Turkey’s few opposition parties present a viable alternative. “Without a new party,” he concluded, “you cannot challenge Erdogan. These [current opposition] parties, forget it.”

It remains to be seen whether Hizmet members, backers of European integration, or another group can present an alternative political vision for Turkey’s future. But for the moment,  a lack of opposition parties may not be the only factor enabling Erdogan’s authoritarianism. Towards the end of his talk, Dr. Hermann related an anecdote suggesting that even the members of his inner circle have resigned themselves to his strongman tactics. Before flying to Chicago, Dr. Hermann had interviewed Turkish Prime minister Ahmet Davutoglu. The Prime Minister had denied any notion of a democratic retreat within Turkey.

“However,” Dr. Hermann remarked, “I find it peculiar that it isn’t him [as Prime Minister] chairing cabinet meetings.” Erdogan had taken over that role.

After Dr. Hermann’s event in partnership with University of Chicago’s International House, Niagara Foundation had the pleasure of hosting him on February 3rd in a roundtable discussion about his book. 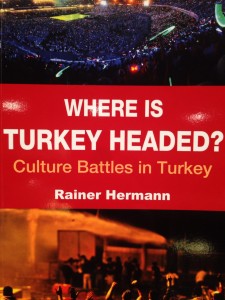 Hermann discussed the social changes Turkey has been going through since the 1980’s through his own experiences and the history of the Turk Republic. He provides a critical analysis of cultural, economic and political developments that halted Turkey’s progress towards becoming a more democratic state and allowed Prime Minister Erdoğan to transform the nation into a more secular authoritarian state.

When asked about the villainization of the Hizmet movement in Turkish media, Hermann defended Fethullah Gulen and stated that in most circles (outside of Turkey), people understand that the Hizmet movement has no agenda in overthrowing the Turkish government or creating a “parallel state.” In Where is Turkey Headed?, Hermann includes an essay, On Hizmet Exceptionalism, where he takes a clear stance on the influence of Fethullah Gulen. Here, he explains how Prime Minister Erdoğan feels threatened by this movement in the last few years and is manipulating the media and using this conspiracy theory as a scapegoat to help centralize and solidify his control.

We would like to thank Rainer Hermann for coming to speak with us today and sharing his insights into Turkish history, politics and current affairs. To learn more about the pivotal role Turkey plays as an actor bridging the West and Middle East, read Where is Turkey Headed?.