On Wednesday, June 17 in preparation for World Refugee Day (June 20), Niagara Foundation joined with the United Nations Association – Greater Chicago Chapter (UNAUN) to discuss the state of events in Syria and how to alleviate the tremendous human suffering and refugee crisis. UNAUN presented Close Up and Curious: Syrian, Refugees, and the UN event hosted and sponsored by the United Nations Association (UNAUN) Greater Chicago Chapter. Between mouthfuls of hummus and savory chicken shwarma, guests listened intently to the distinguished panel of four professionals, each with their own hands-on involvement with the Syrian refugee crisis. Ryan Kaminski, Dr. Zaher Sahloul, Dr. Wendy Pearlman, and Stacey Tsibulsky each took unique approaches to describing the challenges both the refugees and aid agencies are facing with regard to the Syrian crisis.

The mass exodus of 9 million Syrians–nearly half of the total population–has called the international community into action. Since the outbreak of the civil war in 2011, millions of Syrians have made cross-country treks to find refuge abroad and away from Syria’s relentless carnage. Though the genesis of the conflict has been ongoing for nearly four years, Program Manager for Human Rights and Special Initiatives at the United Nations Association USA, Ryan Kaminski claims that it is a dynamic issue. “The center of gravity on the battlefield seems to be changing,” Kaminski said. Recent reports claim that the regime is under new strain and allege the use of chlorine gas and chemical weapons. The Syrian strife is “entering a more serious phase of events,” that some Syrians are likening to the years of Libyan conflict, Kaminski said.

With over four million registered refugees, the strain on global non-governmental organizations is nearing its limit. The World Food Program is just one of a myriad of organizations that works to mitigate the Syrian crisis. Currently, the World Food Program feeds over three million Syrians both internally and externally. “These numbers may increase to four million by October 2015,” Kaminski said.Without a centralized system in place, many Syrians would be at serious risk to illness, malnutrition, and even death. The sustainability of international agencies like the World Food Program is incredibly important–yet, such life-saving services to Syrians presently face budget cuts in the U.S. Congress. Such cuts are curtailing the ability to save Syrian lives, but a lack of robustness on the part of the U.S. government places Syrian refugees secondary to other foreign policy interests.

President of the Syrian American Medical Society (SAMS), Dr. Zaher Sahloul, condemns the lack of US political will by shining a spotlight on neighboring countries. The voluntary movements of the United Nations undermines the importance of intervening in Syria. “The UN is very small [and slow] to move…so we need to have global actors to [compel] the United Nations to move forward,” Dr. Sahloul said. Despite the highly scrutinized efforts of the UN Security Council, Turkey has been monumental is addressing the Syrian diaspora by providing more than $6 million in foreign aid to refugees. In addition to this, refugees receive free healthcare, job opportunities, and free education with curriculums that include Arabic. For this reason, “the role of civic society in Syria is very important” Dr. Sahloul said. The US must open its humanitarian corridors in order to save the amount of human capital that continues to be lost in unprecedented numbers abroad. Because of its hospitality and the plethora of organizations, “Chicago is one of the best cities for refugees to come to” Dr. Sahloul said. Such organizations make a difference in the lives of those affected by the Syrian conflict. 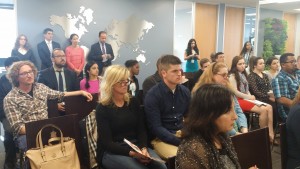 American media outlets rarely view the conflict from the eyes of the Syrian refugees nor do they convey the urgency of this mega-crisis. Crown Junior Chair in Middle East Studies and Assistant Professor of Political Science at Northwestern University, Wendy Pearlman, conducted research in Jordan and Turkey to close the inferential gap with respect to the Syrian crisis. She interviewed over 200 individuals about their experiences in the Syrian uprising and war. According to the series of interviews, Syrians view the rebellion as “an omnipresent security apparatus” Pearlman said. There is a fear of prosecution paired with a loss of identity. The government has systematically instilled a threat of punishment that Pearlman refers to as a “politics of fear.” This in turn regulates the mode of thinking and behavior of the population as the fear of being denounced as a renegade is palpable. Syrians have endured a “semi-normalized state of horror” Pearlman said. They have developed a “visceral nervousness of being under war [conditions]” leading to an “immunity to shock and even death” Pearlman said. A tremendous amount of trauma, rooted in the continuous exposure to death and artillery fire, have made Syrians a shattered, broken people. Even in such conditions, Syrians have grown extremely resilient. When she interviewed individuals who participated in a demonstration to defy the politics of fear, many claim to have experienced a “rebirth” and discovered a “new sense of self through the revolt” Pearlman said.

Syrian refugees are profoundly linked to trauma, making it a part of their newfound identity. But, not every Syrian’s are fortunate–in this regard–to have participated in a demonstration. Many remain vulnerable and susceptible to violence and illness. For the droves of Syrian refugees that have fled the Middle East in hopes of starting a new life, there is an extreme shortage of services abroad. RefugeeOne is just one organization that exists in the Chicagoland area. Stacey Tsibulsky, RefugeeOne’s Employment Services Manager, has personal experience working with many refugees, including survivors of the Syrian conflict. “Only half of one percent of refugees are actually resettled,” Tsibulsky said. Annually, the US accepts only 70,000 refugees from very different backgrounds–only 1,000 from Syria. “Some [individuals] have been in refugee camps for seventeen years” Tsibulsky said. “So coming from an environment like that to Chicago, you can see there are a lot of adjustments and challenges [the refugees] have to face.” Tsibulsky assists vulnerable individuals with finding affordable housing, providing information to take English classes and assisting in the job placement needs– an underwhelming list of the challenges RefugeeOne faces.The individuals arriving from Syria often suffer from psychological traumas including post-traumatic stress disorder and anxiety; consequently, acclimating these individuals and families to a new culture and environment is challenging. Continued budget cuts diminish agencies like RefugeeOne’s ability to alleviate the hardships for these individuals and families. While there are services within the U.S. that aim to address the Syrian refugee crisis, the continued threat of cuts for these organizations only perpetuates, rather than solves, the issue.

Outlining a robust, strategic plan for addressing this issue should become a primary concern for US officials. Such quid pro quo with assistance to refugees will benefit US foreign policy interests in the long-run as well as uphold the principles of our country. “We can act locally and make a global impact” Kaminski said. Attendees at the event spurred into action, signing a letter to his/her state representative imploring that there be a concerted effort given to refugees in the US and abroad. Such discretionary funding cuts are carte blanche on the part of our representatives. As citizens, we have a role to play in civic society which includes contacting our government officials to petition decisions that adversely affect lives. “We should encourage our policy makers to push for more expedited refugee settlement in Chicago and in the United States” Dr. Sahloul said. If you would like to contribute to alleviating the Syrian crisis, please visit RefugeeOne’s website at http://www.refugeeone.org or contact your state representative directly.