Five years ago, in the summer of 2009, I was fortunate to enjoy an incredible voyage to Turkey with my husband and my then 11-year old daughter. Our wonderful guide Hilmi came all the way from Chicago to show us his beautiful country.

Istanbul, the old Constantinople, the Bosphorus, Ephesus, Ataturk: all these words held connotations of an exotic, somewhat mysterious place and history. What we discovered was a modern, dynamic country with an innovative and hard-working populace striving to properly manage the fate it has been given by geography and circumstance: the bridge between East and West at the crossroads of sometimes competing faiths and political ideologies. 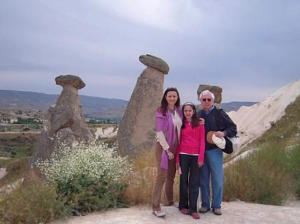 The best way to get to know a country is to truly interact with its people. We were welcomed into the homes of Turkish families for meals and conversation. Despite the cultural differences – often the women covered their heads, while I did not – these occasions were full of respect, kindness, laughter and more often than not, some sort of music.

Traveling around the country we were impressed by the modern roadways, airports, public buildings and general infrastructure. Some of the most incredible historic sights were well maintained and organized for visitors. The Blue Mosque, Hagia Sophia, the Dolmabahce and Topkapi Palaces in Istanbul were spectacular. A boat ride down the Bosphorus and a visit to the Grand Bazaar were other highlights of our stay in that magical city.  Driving back and forth on a bridge that crossed the straits had my daughter shouting in delight, “Now we’re in Europe, now we’re in Asia, now we’re in Europe again, oops now we’re in Asia!” 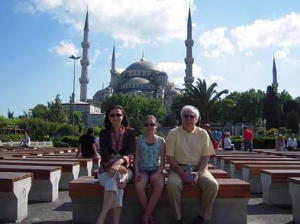 A visit to the capital city of Ankara included sitting in on a session of the Grand National Assembly and lunch with members of parliament, as well as an outing to the Kemal Ataturk Mausoleum. In Cappadocia we were up before dawn to ensure we could watch the sunrise from our hot air balloon as we drifted over the rocky landscape. Exploring underground caves in Goreme and contemplating the sea from Izmir were activities we enjoyed as a family. Just when we thought things could not get any better, we were taken to Ephesus, where we gazed in awe at the ruins of the Library of Celsus, the Basilica of St. John and the Temple of Artemis. Especially emotional for us was a visit to the house where it is said the Virgin Mary spent her last days and the Great Theater of Ephesus where St. Paul preached to the Ephesians.

Overall this was a trip that we will never forget. The combination of visiting historic and holy sites and meeting city leaders and ordinary people gave us a well-rounded, authentic taste of the country. We were delighted by the way we were treated, the fabulous Turkish cuisine that we enjoyed and the real desire by the Turkish people to show us that we have more in common with them than we may think. We are extremely grateful to have had the opportunity to experience Turkey in a unique way. This is a country that will continue to make an important contribution to the history and well-being of the world in the centuries to come.