Five years ago, my wife and I finally realized a long-held dream to visit Turkey. We had been fascinated by the history of this nation which straddled two continents and had been the capitol of a great empire. Our involvement with Niagara Foundation taught us even more, especially about modern Turkey, and we got suggestions on sights to visit from Hakan and Sherif which made the trip irresistible.

Although it is a large country with a variety of terrain and history, we decided to focus on Istanbul, and wound up spending our entire ten days in this extraordinary city. For me, the Galata Bridge over the Golden Horn is the heart of the city, a summary of the energy and complexity that epitomizes Istanbul. To the south the towers of Hagia Sophia and the great mosques, and to the north, modern Istanbul; with ferries swarming on both sides of the bridge, to and from the neighborhoods that reflect the many moods of the city. 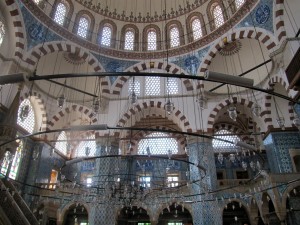 One cannot think of Istanbul without recalling the mosques. There are large, imposing ones (the Blue Mosque and the Suleymaniye), and small gems, like the Mihrimah, and the Rustem Pasha, which is next to the Spice Market, where the natives shop (as opposed to the Grand Bazaar, which must be seen, but is really for tourists). Then there is the magnificent Hagia Sophia, which is in a class by itself: one of the architectural wonders of the world. It was completed in 537, and became the seat of the Orthodox patriarch of Constantinople. It was converted to a mosque after the Ottomans conquered the city in 1453, and now, deconsecrated, an extraordinary museum. 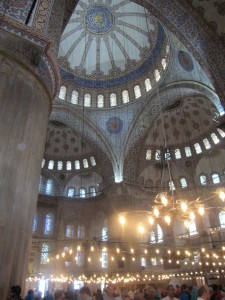 Istanbul is a busy, bustling city, and its citizens reflect its history. There is a wide range in religious affiliation, from orthodox to secular, which is reflected in politics of the country, but also in the way its women dress. On the street, however, there is a remarkable absence of tension between the two: it’s common to see a woman, head, arms and legs covered, walking arm in arm with another wearing shorts and a tank top. 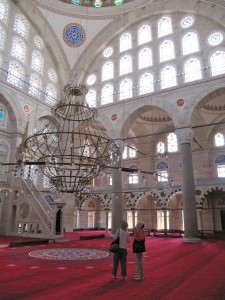 We were fortunate to have a chance to get to know some folks from both ends of the spectrum. Hakan introduced us to a friend who is a very observant Muslim, and who volunteered to show us around town. To our surprise, he invited us to his home for dinner. His warmth and hospitality reflected his profound spirituality. On the other hand, another friend, who divides her time between Istanbul and Chicago, is a modern, secular woman, who introduced us to parts of the city that reminded us of Palm Beach, and was equally warm and hospitable.

Some other features:
The cuisine was an unexpected joy. Lots of lamb and chicken, and spicy vegetables served with a cooling yogurt sauce.
Iznik ceramics: very beautiful, with a long tradition
The rugs: we bought one; it takes a lot of sales resistance not to.