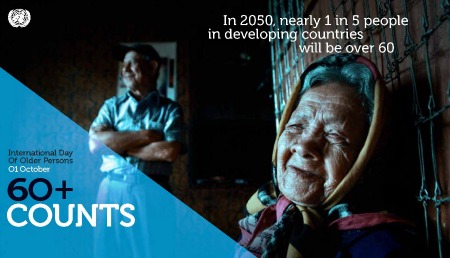 Every year on October 1, the United Nations recognizes the International Day of Older Persons, which was established on 1990. The day is meant to raise awareness about the issues of aging and elder abuse, as well as honor the contributions made to society by the elderly. It is similar to National Grandparents Day in the United States and Canada, Double Ninth Festival in China, and Respect for the Aged Day in Japan.

This year’s theme, “Sustainability and Age Inclusiveness in the Urban Environment,” focuses on the impact of older persons on urban environments and the impact of urban living on them. The UN hopes that the 2015 theme will help improve the quality of life in urban areas through better health and social services as well as demonstrating the importance of older persons in maintaining stable and thriving communities.In his annual address, UN Secretary-General Ban Ki-moon stated, “Making cities inclusive of older persons means generating opportunities for their economic and social participation in accessible and safe environments. It also means providing affordable housing as well as the health and social services needed to support ageing in place.”