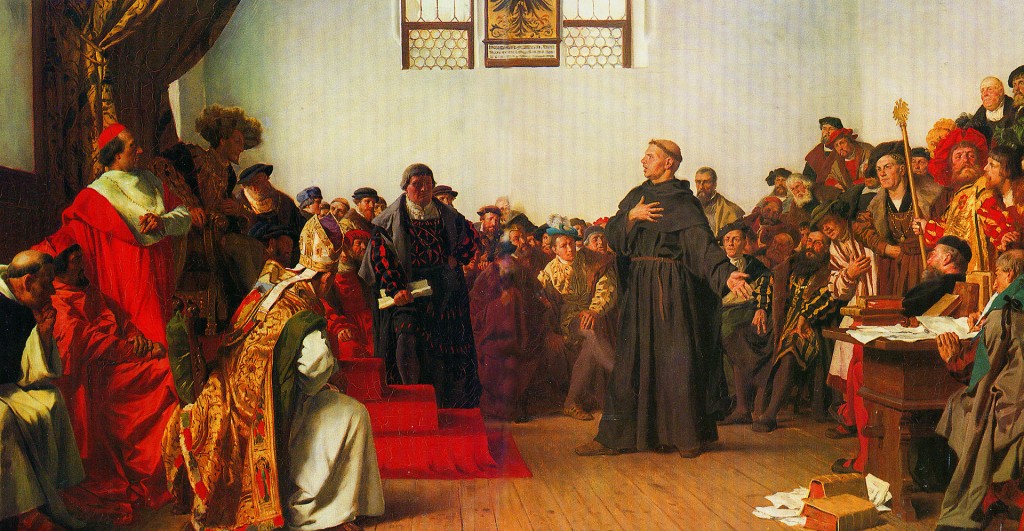 For many Americans and Westerners around the world, this is Halloween weekend. Yesterday was a day of trick-or-treating with family, wearing costumes, and watching horror movies (like I did) and today is a day for regretting all the candy eaten, parties attended, and scary movies that cause last night’s nightmares and sleeplessness. For Christians, this is a very holy weekend: on October 31, Protestants celebrate Reformation Day and all Christians celebrate All Saint’s Day today on November 1. Reformation Day celebrates the day in 1517 on which theologian Martin Luther posted the 95 Theses (his criticisms of practices of the Catholic Church) on the door of Wittenberg Church. His actions started the Protestant Reformation during which several new denominations split off from the Catholic Church over theological disputes including the controversial indulgence. The following day, All Saints Day, is a day to remember all those who have died, including family, friends, saints, and martyrs for the Christian faith.

Growing up in the conservative Lutheran Church – Missouri Synod (LCMS), these two days symbolized and remembered the necessity of theological orthodoxy. We sang the dirge-like version of A Mighty Fortress is Our God and not the more complex tune arranged by Bach, listened to sermons railing against John Tetzel and the Catholic Church of the 16th century, and remembered Martin Luther’s “Here I Stand” line in our own struggle to keep the faith. Now however, the meaning has changed: this weekend is an important time to commemorate religious reform and those who fight to expose wrongdoing by the clergy.

Martin Luther never intended to break off from the Catholic Church, as he was originally an Augustinian monk and a Doctor of the Church. Instead, he wanted to change certain doctrines such as indulgences and the power of the Papacy, and various clerical abuses. However, after Pope Leo XVI excommunicated him and declared his teachings heresy, Luther began creating churches and developing liturgies to teach the German people what he believed to be true Christian doctrine. Other reformers such as John Calvin and Huldrych Zwingli spread new ideas throughout Europe and created Calvinism, which still influences many Protestant churches today. We count these men and others such as English Reformer Thomas Cranmer among those commemorated on All Saints Day, as they all benefited Christianity in its necessary reform.

While many conservative Lutherans praise and hail Luther almost as a saint, Luther was not without his dark side. Most people outside of Lutheranism know him for this polemic and controversial text “On the Jews and Their Lies,” which denigrated those of the Jewish faith for their perceived role in the death of Jesus Christ. Some scholars believe this text heavily influenced German anti-Semitism in the 1500s and influenced Hitler and the Nazis, who used this work as a tool to support their attacks on Jews. Lesser known is Martin Luther’s staunch denunciation of heliocentrism, the astronomic model of the universe depicting the Earth revolving around the sun: “However, as Holy Scripture tells us, so did Joshua bid the sun to stand still and not the earth.” As he demonstrates, reform does not happen only once: attitudes towards doctrine, beliefs, and people must always evolve with social changes and new scientific discoveries.

That is why religious reform is so important now, and why religious figures such as Pope Francis are so desperately needed. While we remember those earlier reformers who stood against abuse and corruption, we cannot forget that they too had failures. Many Christian denominations resulting from the Protestant Reformation, such as the LCMS, refuse to take part in interfaith dialogue and exclude women from most roles in the church, even serving Holy Communion. The Catholic Church is again enshrouded in scandal due to rampant sexual abuse by priests and corruption in the Vatican. Others refuse to acknowledge scientific evidence and discoveries because of a single verse in the Bible, and many churches do not allow LGBTQ persons to even step inside their sanctuaries. In this modern era, it is still important to remember our religious roots and the important leaders in their establishment. However, we cannot remember only their struggles on these days: we must cherish all those who chose to question the unquestionable and sacrificed their efforts and lives for the sake of justice in the world and in the church.