On Wednesday, May 27, the Niagara Foundation was pleased to have Jenné Myers, Chief Executive Officer of Chicago Cares, speak about “Working Together to Transform Chicago for Good.” Ms. Myers started her talk by giving some insight into her personal background as well as some details about Chicago Cares.

Ms. Myers has devoted her life to serving others and understands the importance of giving back to the community. She has demonstrated this repeatedly over the course of her career. Prior to leading Chicago Cares, Ms. Myers worked as executive director of Working in the Schools (WITS) where she helped promote literacy through volunteer programs in elementary schools across the City of Chicago. Ms. Myers has also held leadership roles in city government, first serving as Mayor Daley’s scheduler and assistant and later as Mayor Emanuel’s Chief Service Officer. When talking about her career, Ms. Myers referred to herself as the ultimate ‘outside insider,’ as she’s had experiences serving in both government and non-government roles.

Chicago Cares was started 24 years ago with the main goal of giving back to the city. Ms. Myers stated that while there are many wonderful reasons to get involved in the community, there can be some confusion that arises when trying to organize and lead volunteer opportunities. Chicago Cares aims to make volunteering in Chicago a seamless process, with a focus on group volunteering. Calling the process “Volunteering 101,” Ms. Myers explained that many of the volunteer opportunities organized via Chicago Cares have low thresholds on commitments, making them more accessible to non-profit organizations and working professionals. 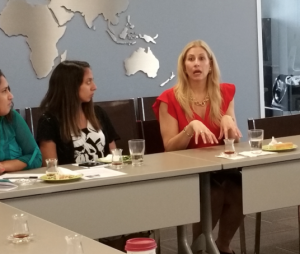 The second half of Ms. Myers’ talk centered on her three visions for Chicago Cares. First, she explained that she would like Chicago Cares to take advantage of new and better technologies. In a society where just about everyone has a smart phone, it is important for people to have access to interactive apps as well as a mobile-friendly websites. An easy-to-use Chicago Cares phone application would simplify the volunteer process and could potentially get more people involved in their communities.

Second, she explained how she wants to dig deeper into the communities. Chicago is a very diverse city, but as Ms. Myers lamented, the vast majority of volunteers are caucasian women between the ages of 25-35. She stated that one of her goals as CEO of Chicago Cares is to diversify the volunteer base, with an emphasis on volunteering in your own neighborhood.

Third, Ms. Myers wants Chicago Cares to be an advocate for volunteerism in the Chicago area. She stated that “service is an equalizer” where there is no real hierarchy. When people come together to work on a shared task or goal, there is really no limit to what they can accomplish. Chicago Cares, with Ms. Myers at the helm, aims to nurture this aspect of volunteerism with the hope that more and more people start to give back to their communities.

We would like to thank Jenné Myers for coming in to speak. Her engaging overview of what Chicago Cares is doing to make our city a better place was enjoyed and appreciated by everyone in attendance.