On June 10th, Mr. Mageed Refaat Aboulmagd, the Honorable Consul General of the Arab Republic of Egypt in Chicago, joined the Niagara Foundation for a discussion on American media coverage of current events in the Middle East. To begin the discussion, Mr. Aboulmagd offered a brief description of Egypt’s diplomatic presence in the US and his own background. He has represented Egypt in various diplomatic posts for the past 25 years, with past stations including Nigeria, the United Nations in New York, Russia and more. He explained that Chicago is a critical consulate location for Egypt due to the presence of heavy industry and an expansive grain trade, as Egypt is the largest importer of wheat in the world. 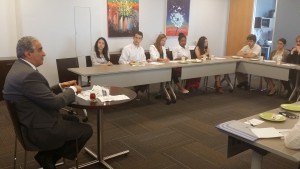 First, American media often mistakenly blames conflict in the Middle East on Sunni and Shia divides. Mr. Aboulmagd completely rejects this sectarian explanation and instead says that political motives are at the root of every current conflict within the region. Surely, he explained, many governments have used sectarian politics to advance their own interests but it has nothing to do with actual ideological differences or natural prejudices between Sunni and Shia individuals. Secondly, American media focuses on the need for US disengagement in the region (and a re-pivot to Asia, instead) without acknowledging the costs of such disengagement. While many American citizens and politicians agree that the US has “overinvested” in the region, disengagement too has its downfalls. The Middle East, for example, will continue to control the global oil market no matter how much the US tries to decrease its dependency on Middle Eastern oil. Furthermore, he pointed out how just today the US has sent 450 advisers to Iraq to help in the fight against ISIS, despite attempting to withdraw from the country over the past few years. Therefore, disengagement is both more costly and more complicated than what American media claims.

Next, while many American media outlets advocate for the “redrawing of maps,” or splitting countries among ethnic lines, Mr. Aboulmagd does not believe this is a viable solution. He sees the solution as building a national state, not breaking them apart. This “redrawing,” he said, will only create more conflict within the region and cannot be touted as a quick solution. Similarly, he rejects the idea that integrating political Islam will promote stability and democracy in the region. He explained how islamist politicians have been repeatedly rejected in the Middle East in recent years. Citizens in the Middle East, he says, want good government and better accountability, not a religious state. Finally, he stated that American media must stop subcontracting regional, Arab security to non-Arab states. He explained that Arab countries must be at the root of solving Arab issues, instead of non-Arab countries like Israel, Turkey and Iran.

During the question and answer session after the discussion, he focused more heavily on Egypt-US relations and the current state of Egypt. While there have been many setbacks in the country since its 2011 revolution, he believes the country has seen tremendous positive growth in terms of economic issues and political participation. He believes the key to good government in the country, that has yet to be established, is the emergence of more political parties. He also informed the group that the US and Egypt will initiate a series of talks as part of a strategic dialogue beginning next month. These talks will clarify what the strategic partnership between the two countries should be, and how they can best work together to promote growth.

Niagara would like to thank Mr. Aboulmagd for his engaging and highly relevant talk. We are extremely inspired by his mission to promote a better understanding of the conflicts in the region in order to produce meaningful progress.