The Niagara Foundation is proud to present its annual Chicago Interfaith Gathering (CIG), “2016 Presidential Election: The Effects of Political Rhetoric on Minority Communities”.

The CIG is a three-day event, whose purpose is to bring together people of various religious and social backgrounds to discuss pertinent issues. At this three-day-long program, Niagara Foundation assembles some of the country’s top intellectuals, peace building professionals, and interfaith leaders at a panel and college students at a workshop to address current trends and challenges in the project of healing individuals and communities during and after conflicts. The program adjourns with a dinner of friendship, called the Abrahamic Traditions Dinner.

As the United States gears up for another presidential election, it can credibly be said that the American public has never encountered such political polarization. Minorities have become the scapegoat of candidates on their way to further contextualize political agendas and motivations. What will be the outcome of such agendas, and how are they risking a clearer future ahead for the fostering of dialogue? How can we address them? At this year’s Chicago Interfaith Gathering, the Niagara Foundation explores lessons in dialogue among minorities and promoting peace after or during such political polarization.

Please join the Niagara Foundation as we uncover the importance of building bridges in our communities and our world.

As part of the three-day CIG program exploring the relationship between dialogue practices and political tension, Niagara will be conducting an educational workshop for college students on the 2016 Presidential Elections’ political rhetoric, ranging from xenophobia to racism and the importance of dialogue as a solution: “Combat Bias and Bigotry”.

Niagara will create a space where college students from across the city can gather to meet in a dialogue setting, learn about and question the political rhetoric that aims to contextualize other motivations and the effects of it on minority communities.

Students will be guided through a “circle process” to digest the day’s presentations, to invite deeper reflection on their role/responsibility to the larger community, and to explore if and how one’s personal identity politics/experiences provide any solution or guidance for navigating through issues caused by political rhetoric and/or tension.

The session will include a training session followed by a reflection portion asking students to write a declaration statement on how they will partake in peacemaking processes in their communities. Participants will receive a certificate of completion at the end of the day.

[expandsub1 title= “Bio”]
Gerald Hankerson is CAIR-Chicago’s Outreach Coordinator. Gerald administers CAIR-Chicago’s internship, volunteer activist and youth programs, interfaith engagement, public awareness and education initiatives, community outreach, and civic engagement efforts. He currently serves as a board member of ARISE-Chicago and is a representative of its Faith Labor Solidarity and Workers Justice programs. Given his years of service and activism, North Park University in Chicago recognized Gerald as a “Man of Excellence” in 2012. While an undergraduate at University of Illinois at Chicago (UIC) where he studied Communications with a minor in Theatre, Gerald was active in the Muslim Student Association, the Black Student Union, and served as the UIC Ambassador to the African American Action Network (AAAN). Gerald is committed to bridging gaps between diverse communities. Gerald can be reached at ghankerson@cair.com.
[/expandsub1]

b. Panel Topic: Presidential Elections 2016: In what ways do political tensions and rhetoric harm minority communities?

As reported on a Washington Post article, a group of Trump supporters surrounded, knocked down and almost choked a black man who was supporting the Black Lives Matter cause in Birmingham, Alabama. At an Indiana high school, students sought to intimidate their opponents by chanting “Build a wall; build a wall” during a basketball game against a school with a heavy Latino student population. At another instant, an armed group gathered outside a Dallas mosque where they menaced and threatened worshippers. The next day, another politically intoxicated man threatened to blow up a mosque in VA and then threw smoke bombs and a Molotov cocktail at the facility. American political rhetoric has grown so toxic that these kinds of politically motivated violence occurrences have almost become natural.
Our keynote speaker and panelists will examine the ways in which political tensions and rhetoric harm minority communities and societal peace. Then, they will discuss the role of dialogue in the process of peace-building at a time of political tension and take a critical look at the dynamic of building relationships between individuals and minority communities. 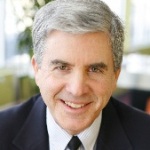 [expandsub2 title=”Bio”]
Rev. Dirk Ficca is currently Director of the Interreligious Initiative for Middle East Peace of the Presbytery of Chicago, and the International Director of ‘First Steps,’ a social cohesion initiative in Minneapolis – St. Paul.

From 1992 to 2012, Rev. Ficca worked in various capacities with the Council for a Parliament of the World’s Religions, serving as Executive Director for the last fifteen years. During his tenure the Council organized the world’s largest international interreligious gatherings, with major Parliament events in Chicago (1993), Cape Town (1999), Barcelona (2004) and Melbourne (2009). Under his leadership, the Council’s mission promoted interreligious dialogue, grassroots organizing, and global networking in cities around the world.

He has previously served as pastor of the First Presbyterian Church of Benton Harbor, Michigan (1981 – 1992), and helped to found Open Skåne, an interreligious initiative promoting social cohesion in Malmo, Sweden (formally established in 2014). Rev. Ficca is writing a book on Hizmet, a progressive Islamic civil society movement out of Turkey. He also serves as a consultant to Church of Sweden on interreligious and refugee concerns.
[/expandsub2]

[expandsub3 title=”Bio”]
Michael C. Dawson is the John D. MacArthur Professor of Political Science and the College at the University of Chicago. He has also taught at the University of Michigan and Harvard University. Dawson received his BA with High Honors from Berkeley in 1982 and doctorate degree from Harvard University in 1986. Professor Dawson was co-principal investigator of the 1988 National Black Election Study and was principal investigator with Ronald Brown of the 1993-1994 National Black Politics Study.

His previous two books, Behind the Mule: Race and Class in African-American Politics (Princeton 1994) andBlack Visions: The Roots of Contemporary African-American Political Ideologies (Chicago 2001), won multiple awards, including Black Visions winning the prestigious Ralph Bunche Award from the American Political Science Association. Dawson has also published numerous journal articles, book chapters and opinion pieces. Dawson’s strong interest in the impact of the information technology revolution on society and politics, as well as his research on race are both fueled in part from his time spent as an activist while studying and working in Silicon Valley for several years. Dawson is currently finishing an edited volume, Fragmented Rainbow, on race and civil society in the United States as well as a solo volume, Black Politics in the Early 21st Century. 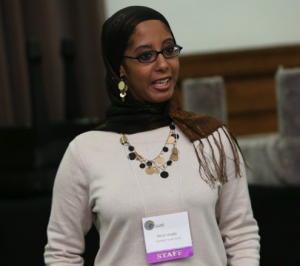 Panelist
Founder and Curator of Side Entrance

[expandsub5 title = “Bio”]
Hind Makki is an interfaith educator who develops and delivers trainings on civic integration and community empowerment. An internationally recognized speaker, Hind has been invited to deliver speeches and workshops on interfaith cooperation, civic integration and developing Muslim women’s leadership throughout North America and Western Europe. She is involved in building Muslim-Jewish relationships in Chicago and is an alumna of the American Muslim Civic Leadership Institute and is focused on challenging misogyny, racism and sectarianism in Muslim communities across the country.
Hind Makki is the founder and curator of Side Entrance, a crowd-sourced website that documents women’s prayer experiences in mosques around the world. This site won the “Best Female Blogger” Brass Crescent, an award that honors the best of the Muslim blogosphere and has helped to catalyze a national conversation on the spaces women occupy in American Muslim congregations, organizations and communities. Hind is also a founding member of MuslimARC, a collective of Muslim activists who develop tools and educational resources to address racism within their communities.

An alumna of the American Muslim Civic Leadership Institute, Hind has appeared on Al Jazeera’s “The Stream,” Chicago Public Radio and Huffington Post Live; her work is featured in Alarabiya News, AltMuslimah, Common Ground News, The Economist, The Huffington Post, Islamic Horizons, National Public Radio, PolicyMic; and she has published pieces in The New York Times and The Washington Post. Hind holds a degree in International Relations from Brown University.
[/expandsub5] 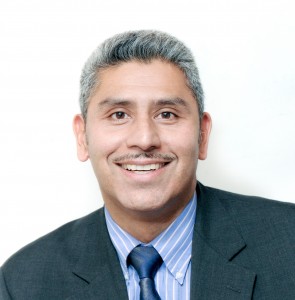 [expandsub6 title = “Bio”]
Juan Salgado has been the President and CEO of Instituto del Progreso Latino (Instituto) since 2001 where he led the organization through a period of national award winning recognition and historic growth spurred by a focus on creating partnerships, enhancing core competencies, leading innovation, providing quality services, and participating in targeting advocacy. Under his leadership, Instituto has established best-practice educational and workforce models resulting in significant economic mobility and wellbeing for Chicago families. Juan is a civic and economic leader in Chicago and also an influential voice in local and national settings for his work on the educational, political, and economic advancement of the Latina/o community. Juan appreciates the value of bridging the private and public sectors to promote upward mobility in the workforce does so by partnering with the Metropolitan Chicago Healthcare Council, World Business Chicago, City Colleges of Chicago and Chicago Public Schools to expand diversity and opportunity in the healthcare and manufacturing sectors. In recognition of this innovation and impact, Juan was selected to join the prestigious MacArthur Fellows class of 2015.

The three-day Chicago Interfaith Gathering will be adjourned with Niagara Foundation’s annual Abrahamic Traditions Dinner. At a time of such political polarization and bigotry caused by the political rhetoric of the 2016 presidential elections, Niagara aims to unify and celebrate the religious diversity of our city, Chicago. This dinner aims to strengthen the bond of friendship and understanding between people of the three Abrahamic religions: Judaism, Christianity and Islam.
In this year’s program, influential religious voices from the three Abrahamic traditions will comment on refugeeism in the lives of Moses, Jesus and Muhammad, as well as teachings on refugees in the three Abrahamic faiths. This program is a response to the issue of refugee victimization caused by the political rhetoric of the 2016 elections.
A diverse collection of religious leaders, government officials, academics, and members of the general public will gather for a diverse evening of food, reflection and conversation. 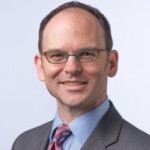 [expandsub4 title=”Bio”]
Rabbi Reeves became the rabbi of KAM Isaiah Israel in July 2013. He is thrilled to serve this diverse and multi-generational congregation as a spiritual leader. Rabbi Reeves is passionate about Jewish learning and meaningful worship, and he is a dedicated advocate for social change.

Prior to coming to KAM Isaiah Israel, Rabbi Reeves served as the Associate Rabbi of The Temple in Atlanta, Georgia. Additionally, he served Rockdale Temple in Cincinnati, Ohio, as a rabbinic intern. Rabbi Reeves is passionate about combatting global climate change and was recognized for his work by Georgia Interfaith Power and Light. He has worked towards interfaith understanding in numerous ways, including serving on the executive board of the Faith Alliance of Metro-Atlanta, co-leading a trip to Spain for Jews, Christians, and Muslims with World Pilgrims, and by serving as faculty for the Institute for Christian and Jewish Studies’ Reclaiming the Center program.

A native of Richmond, Virginia, Rabbi Reeves has a degree in French literature from the College of William & Mary in Virginia. He earned an M.A. in Hebrew Letters and was ordained at the Hebrew Union College – Jewish Institute of Religion in Cincinnati, Ohio. Rabbi Reeves has four children: Violet, Asher, Levi, and Hazel. He and his wife, Lauren, love living in the Hyde Park neighborhood of Chicago.
[/expandsub4]