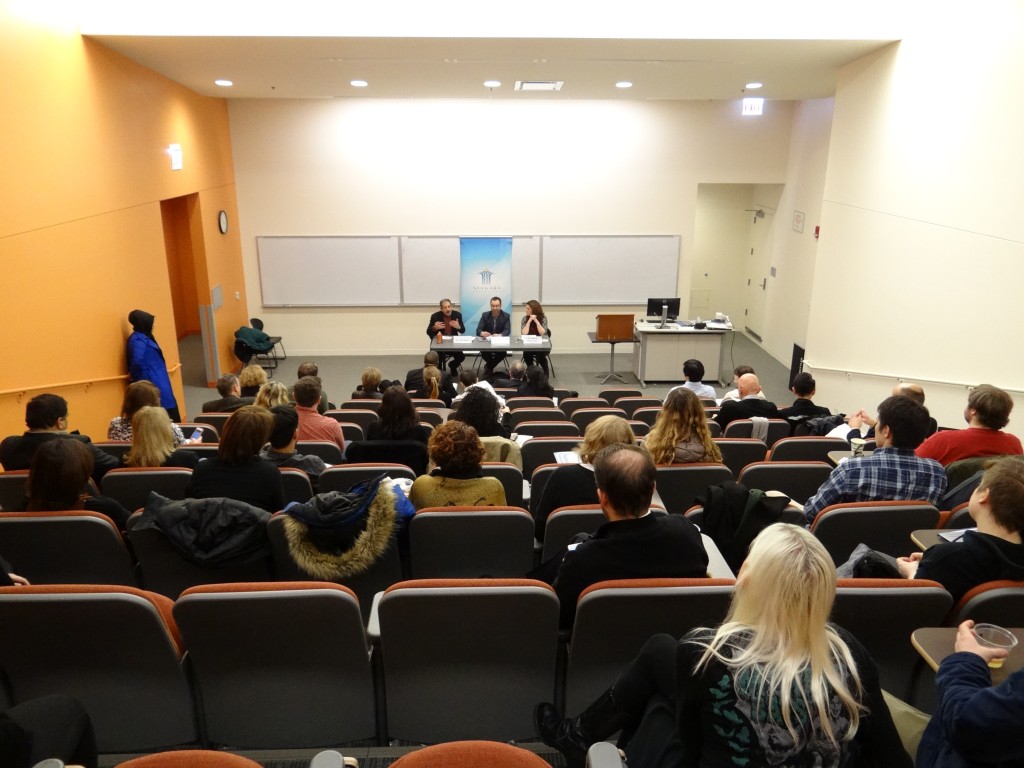 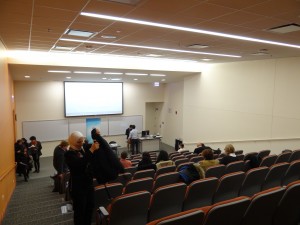 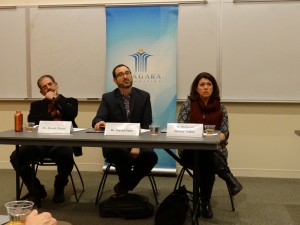 The first panel, “Crisis in the Gulf” contained presentations by Dr. Stacey Philbrick Yadav and Dr. Kaveh Ehsani. Dr. Yadav began her presentation with a history of the Yemeni uprising in 2011, as citizens of Yemen became increasingly disgruntled with the economic and social state of Yemen. She posited that a humanitarian crisis emerged because of the 2.5 million internally displaced persons, and the 21 million Yemeni who needed aid. However, despite this mass upheaval, and the fact that the Yemeni uprising emerged during the height of the Arab Spring, this conflict was not a proxy war. Dr. Yadav also expounded on the difficult issue of Muslim identity in a state that has over 2,000 distinct tribes, a north-south political divide and a variety of Islamic organizations involved in the conflict, “A couple of years ago if you asked Yemenis point-blank, ‘What kind of Muslim are you?’ They would struggle to meaningfully answer that question unless they were members of specific Islamic organizations.” Dr. Yadav also illustrated the harrowing reality that the safest places in Yemen currently are controlled by al-Qaeda, and that while the Yemeni conflict saw more bloodshed in the first three months than the Syrian conflict did in the first three years, the Syrian conflict received much more media attention. 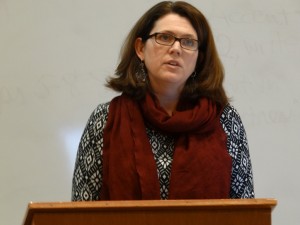 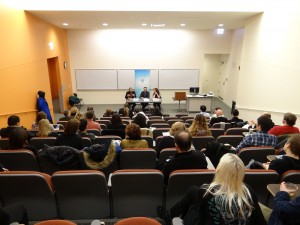 Dr. Kaveh Ehsani’s presentation focused primarily on the current state of Iran and Iran’s future of diplomacy with the United States. Dr. Ehsani began his presentation with a brief history of pre-revolution and post-revolution Iran in order to give the audience a context in which to better understand the current state in Iran. In post-revolution Iran, Iranians are wary of the ability of regional conflict and cultural revolution to improve citizen’s quality of life in the state. In post-revolution Iran, citizens care more about upholding the republic, fostering diplomacy in a strategic manner, focusing on building the economy and protecting the state from the downfall of many of its neighbors. Dr. Ehsani expanded on this idea, ““I think there’s a concern that among the establishment in Iran that the regional issue in Iraq, in Afghanistan and now Syria in Yemen are also becoming existential threat, there’s a vacuum, there’s a political vacuum, that Iran has tried to fill, not very well, in all those countries.” 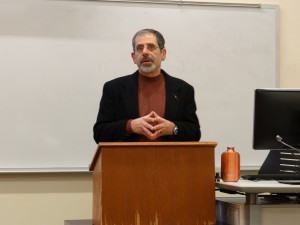 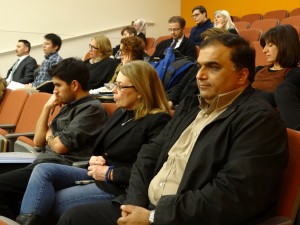 Professor Ehsani posited that American have many misconceptions about the political state of Iran, likely due to misrepresentation of the state in popular media. In fact, Iran is not a totalitarian state; it is a republic where more citizens vote in elections than the United States. Talk about how war made Iranians weary of conflict and less illusioned about meaningful social revolution. But according to Dr. Ehsani, it is in Iran’s best interest to foster ties of diplomacy with the United States, ““Even when the ruling class remains quite hostile and very suspicious of the U.S.’s motives in dealing with Iran, it has come to light that without some kind of formal entering into some kind of regional role in determining the long-term politics of the region and working effectively in coordination, not necessarily in close alliance with the United States is in the long term inevitable.” Dr. Ehsani ended his presentation with highlighting the fact that Iran’s struggles in the last half-century have made the state war-weary, a fact which fortifies their recent efforts at nuclear proliferation. 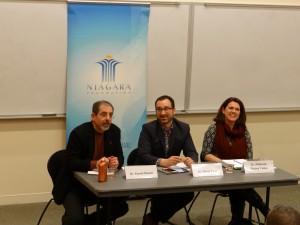 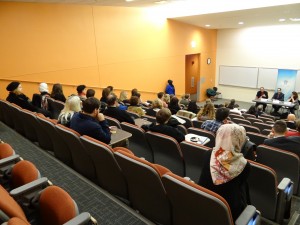 The second panel, “Humanitarian Crisis in Syria” featured speakers Suzanne Akhras Sahloul and Whitney Cross. This presentation sought to answer the question, “What can Chicagoans do to help?” Suzanne Akhras is the founder and president of the Syrian Community Network. The mission of the organization is to provide resources, support, and a sense of community to refugees who are resettled in the United States. The SCN acts a bridge between the long and laborious process of vetting and resettlement and life as a new resident of the United States. The goal is to integrate Syrian refugees into American culture while supporting individual identity and promoting self-sufficiency. Ms. Akhras’s presentation offered a close look at the refugee crisis through photography that captured images of the suffering in Syria, and also by sharing the personal narrative of Wadad, a young girl who became an orphan because of the upheaval in Syria. 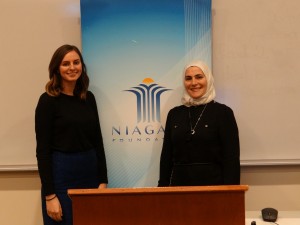 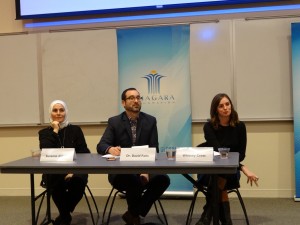 Through these images, she created a personal narrative and a close look at the lives of actual Syrians affected by the conflict. This perspective provided a contrast to an understanding of the conflict shaped through the images provided by mass media outlets, and according to Ms. Akhras, these personal narratives “Shows what’s really happening.” Ms. Akhras also talked about the mission of the Syrian Community Network as one of advocacy, to challenge stigmas about refugees, and, “to give refugees a voice.” Additionally, she praised Illinois politicians Senator Dick Durbin and Chicago Alderman Edward Burke for their efforts at welcoming refugees to resettle within Illinois. Ms. Akhras posited that the most meaningful way for Chicagoans to help with the current humanitarian crisis is to reach out to their respective representatives, and to take a stand against the inflammatory rhetoric repeated by the media and various politicians, “Our collective voice, right now, is the most important voice, if all of us were to be call our representatives, and ask them to take a more active role in Syria.” 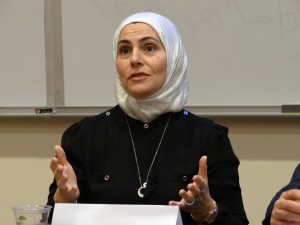 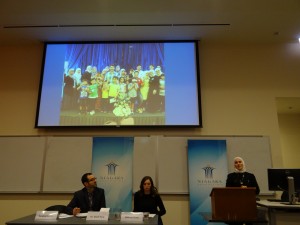 The second speaker for the panel was Whitney Cross. Ms. Cross is a grassroots campaign manager in Chicago for the U.S. fund for United Nations Children’s Rights and Emergency Relief Organization. This organization’s reach extends to 190 countries and focuses its resources on child survival, development, and basic human rights for children. Ms. Cross’s presentation offered the personal narrative of Zahera, an 8-year-old Syrian girl who attended school and lived with her family until her elementary school was bombed. Her family resettled to Lebanon in a refugee camp, after being forced to abandon their home, friends, and whole life in Syria in the name of safety. While residing in the refugee camp, many of the resources for a healthy development were no longer accessible to Zahera. In response to the squalid conditions of most refugee camps, UNICEF seeks to “Create child-friendly places within refugee camps” for children like Zahera. For children like Zahera, school is their favorite place. School reminds the children of their lives before living in a refugee camp, and to them, it feels familiar and safe. The goal of continuing education for youths it to avoid developmental lapses in education, so that when children like Zahera return to their lives in Syria they can rebuild their communities and have fulfilling lives. It is of the utmost importance of UNICEF to see that the countries aided by UNICEF have no “lost generation” -a fact which underscores the grim reality that every country was torn apart by war will one day need the younger generations to rebuild from the destruction. 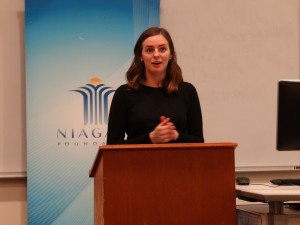 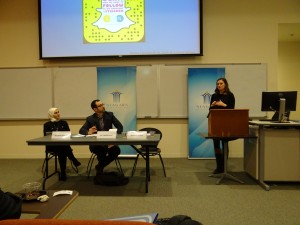 UNICEF’s campaigns extend to other areas besides education and cover nutrition, family reunification, sanitation, protection, healthcare, and any other area that contribute to the wellbeing of children. Because of UNICEF, a child like Zahera has her basic human rights: shelter, food, and a steady education. 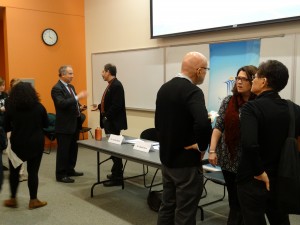 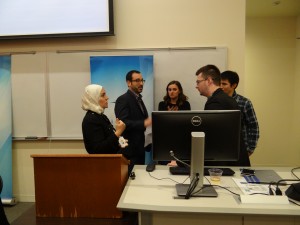 Niagara Foundation would like to extend our warmest thanks to our panelists, our guests and to Roosevelt University.