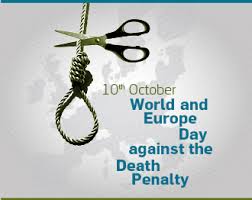 The 13th World Day Against Death Penalty will be marked on October 10, 2015. This day is to raise awareness about death penalty for the offenses that are drug-related; and it calls for the reduction of its use.

Many countries haves added the death penalty for drug crimes in the years of 1980 and 2000. This trend in legal systems has been going down, however some countries still keep executing those involved in drug crimes and drugs is the main cause of death sentences.

The day tries to make a point that the Death Penalty abuses the right of life; it is taken away from people that posses that right of living.

“The death penalty in practice: