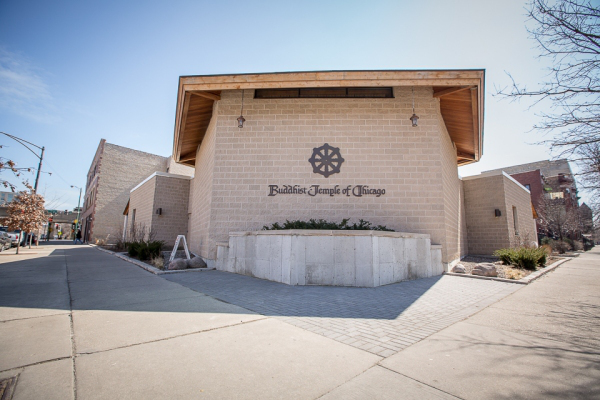 Last week I had the pleasure of visiting a landmark, The Buddhist Temple of Chicago. This 70-year-old institution extends open arms to visitors, and as a newcomer, I was relieved to learn that there were no complicated rituals at the meditation session I would be attending.

I arrived well past dark, and as I entered the building I was greeted by a volunteer who introduced himself as Albert. I informed Albert that this was my first time visiting the temple, and tonight would be my first attempt at meditation. Albert appeared delighted to have a newcomer, and he proceeded to explain the structure of the evening mediation session. I learned that this type of meditation is split into three distinct parts: silent, walking, and silent again. After Albert explained the correct way to sit, and to hold my hands, it was time to enter the temple. 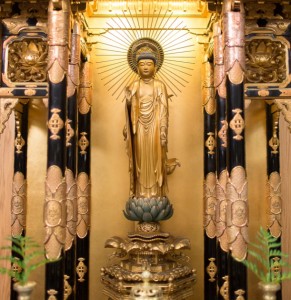 Amida Buddha Altar by The Buddhist Temple of Chicago

After entering the room, I was struck by the ornate beauty of the temple, and the art. I had seen Buddhist art before in museums but never had I seen these images in a spiritual context. It provided a deep contrast to the clinical observation of seeing the art in a museum. The intricate wood reliefs, gleaming shrines, the statues of the bodhisattvas brought a warmth to the space.

It was time to begin. We began by opening the space, and opening ourselves to the space we would cultivate through meditation. We bowed to the space, walked clockwise, stopping halfway around the circle, bowed, and closed the circle and gave a final bow. I sat down, closed my eyes, and placed my hands on the proper place on my solar plexus. Albert had instructed me to attempt to free myself from my judgment of myself, my insecurities, and doubts. To create a space of self-love and acceptance. I made every effort to follow his advice, and while I did not entirely succeed the first time, I did manage to slow the train of my thoughts and to open my arms to a new experience without feeling self-conscious about my ignorance.

After a time, a bell tolled, and it was time for the walking meditation. I kept my eyes open for this part, as we circled the temple in slow, deliberate steps. I was very self-conscious during this period of meditation as I learned how physically difficult it was for me to walk deliberately slow. I spent some time fighting back my urge to walk quickly, but that train of thought violated everything which I hoped to achieve by meditation. So I had to cast aside my usual concept of walking to get somewhere in a hurry, and took the slowest steps I possibly could. After several laps around the temple, I found myself back where I had started and sat down. 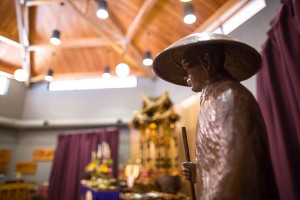 Once again, we entered silent meditation. And for this part, Albert instructed us to focus on creating a space of love. To think of friends, lovers, pets, special places – anything that brings us the delight of love and joy. I indulged in happy memories, one after another, and there was a sense of relief in finding I did not have to dig deep at all to find these images of love. And with a happy heart, the mediation session had come to an end. And while I hadn’t “successfully meditated” I felt that it was time well-spent.

After I collected my shoes, I said my goodbyes and thanked Albert for the experience which he guided me through. Albert was kind enough to leave me some words of wisdom, “When you help yourself, you help others.”