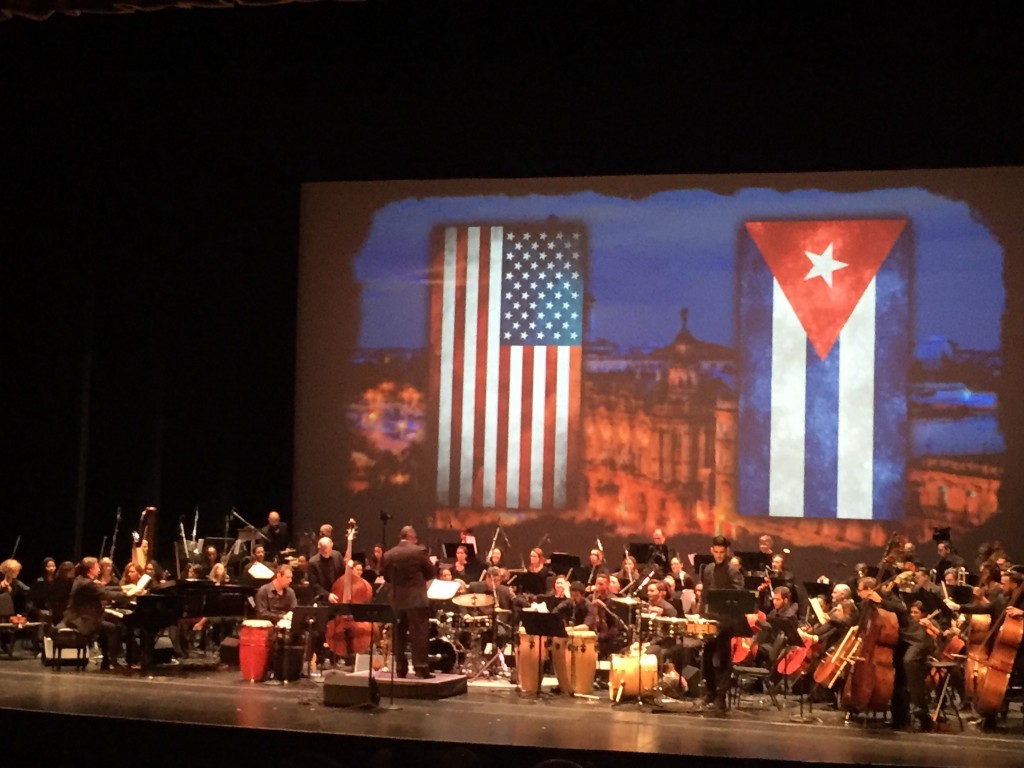 The Chicago Jazz Philharmonic wanted to create a multicultural experience with students from Havana. This seemed irrational, due to the frosty relations between the two countries. A proposal to invite Cuban students to perform with the Chicago Jazz Philharmonic started to emerge when President Obama announced on July 1, 2015, the historic decision to re-establish diplomatic relations between Cuba and the United States of America. Both governments agreed to reopen embassies on July 20, 2015 and work to develop respectful and cooperative relations based on international principles.

Orbert Davis traveled to Cuba for a multicultural exchange. Davis visited the Universidad de las Artes (ISA) the same day that President Obama and Cuban President Raul Castro made the announcement to normalize relations between the two countries. Was this a coincidence? You decide, but Davis saw this accomplishment between the two nations as the first step towards creating a wonderful Cuban-American musical collaboration.

The Chicago Jazz Philharmonic brought 36 Cuban music students from ISA to play in conjunction with other Chicagoans at the Roosevelt Auditorium Theater. I participated in the event as the students’ translator, and through them I experienced a small part of Cuba. All of ISA students were excited, dancing and singing minutes before the show started even though they were about to play in front of more than four hundred people. The show was truly historic, full of passion and harmony between two nations.

This wonderful artistic collaboration is one example of how Cubans’ will experience cultural exchange, but how this new Cuba-US relationship will impact Cuban’s day-to-day lives? Changes could be gradual but they can also happen very quickly. The main concerns about the reestablishment of relations between Cuba and US involve the increase in tourism, economic changes, advances in infrastructure, and exposure of the media through the Internet.

Tourism is increasing drastically in Cuba. Hotels are booked through April 2016. Travel agencies around the world are reporting high demand for travel to Cuba. Stubborn Mule Travel reported inquiries about Cuba have gone up by 80 percent. Overall, the number of people visiting Cuba is expected to increase 17 to 36 percent as the embargo has already been relaxed to allow US citizens from different fields of research, athletics, education, art, and humanitarian projects to travel there. Also, Cuba will begin to see the arrival of new imported goods and the 1950s and 60s items will soon disappear. Everyone wants to travel to this 44,200 sq mile Island with quaint Colonial villages and beautiful white sand beaches before it changes too much.

Cubans see tourism as a real opportunity for economic growth. Luis Miguel, owner of Casa 1932, one of Havana’s most popular bed & breakfasts says, “Business is increasing and improving, so the small independent sector is gearing up.” As Cuba’s diplomatic relations with the US improve, the economic environment will improve as well. American businesses will be able to sell directly to small business on the island, and any profits from their business will go directly to the owners’ pockets. These new incentives will make Cubans work harder and produce more. However, it is important to note that Cuba still grapples with a lack of resources and infrastructure, especially in the agricultural sector, where machinery is old, and pesticides and herbicides are hard to find. Even with these limitations, changes represent the first significant steps toward a more promising economic model.

Growing access to the Internet in Cuba is another factor that will change Cubans daily routine. Patricia Lockett, a member of Holy Trinity Community Church in Nashville, Tenn., traveled to Cuba five times and she said, “I have noticed a lot of differences between my first and my last trip.” One difference that struck her the most was the quicker electronic communication. In every corner she could see people using laptops, and connecting to the internet. Roughly 25 percent of Cubans have access to Internet while only 5% of Cubans have unrestricted access. Cuba announced plans to open up 35 WiFi hotspots and cut the cost of using the internet by more than half. However, the infrastructure to achieve this involves high costs and it’s unclear if Cubans will be able to afford to pay for a residential internet connection.

Either way, the Cuban internet probably will be different from the rest of the world where many restrictions will be applied. Still, new WiFi hotspots will be great for Cubans to get involved in global conversations. Just like the 36 students from ISA who were able to gain new perspectives from musicians in Chicago, and learn what life is like in the country right next door.