Atlanta, April 9, 2015 – Martin Luther King Jr. International Chapel at Morehouse College awarded its prestigious 2015 Gandhi King Ikeda Peace Award to Islamic scholar Fethullah Gulen in recognition of his life-long dedication to promoting peace and human rights. The chapel has been giving a community builders prize and a peace award since 2001. Past recipients of these awards include leaders such as Nelson Mandela, Rosa Parks, Andrew Young and Archbishop Desmund M. Tutu. 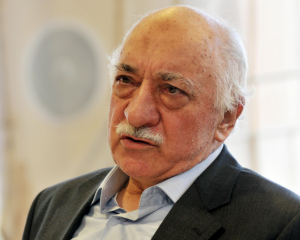 Fethullah Gulen is an Islamic scholar, preacher and social advocate, whose decades-long commitment to education, altruistic community service, and interfaith harmony has inspired millions in Turkey and around the world. Described as one of the world’s most important Muslim figures, Gulen has dedicated his life to interfaith and intercultural dialogue, community service and providing access to quality education.

In a statement presented today, Mr. Gulen said he was humbled by the honor and accepted this award on behalf of the Hizmet participants from different nations, religions and ethnic backgrounds who have devoted themselves to serving fellow humans.

“These educators keep schools open in places like Iraq despite the ISIS threat; they provide education opportunities to girls in Nigeria and Afghanistan; doctors, nurses and humanitarian relief workers serve under dire conditions in places like Somalia and Sudan; entrepreneurs donate to charitable causes despite economic hardship.” He said in his statement: “You were kind enough to recognize their efforts and I simply accept this award on their behalf.” For his full statement, please visit: Fethullah Gulen Statement Accepting the 2015 Gandhi King Ikeda Peace Award.

The Gandhi King Ikeda Peace Award was designed to promote the importance of positive social transformation by honoring those who demonstrate extraordinary global leadership toward reconciling differences. Although Mahatma Gandhi was a Hindu from India, Martin Luther King Jr. a Christian from the U.S., and Daisaku Ikeda a Japanese Buddhist, the overwhelming ethical consistency in the global reach of their philosophies and influence serve as an inspiration to all the world’s citizens.

The chapel’s dean Dr. Lawrence Carter said that the chapel will recognize Gulen alongside photos of Gandhi, King and Ikeda in the chapel, as a Muslim representative of the same spirit. For details on the award, please visit: http://www.morehouse.edu/mlkchapel/our-work/college-of-ministers-laity/.