This past Wednesday, June 17th, Niagara Foundation was pleased to host a Chicago & Global Family roundtable discussion, where Dr. Dick Simpson and Thomas J. Gradel, the esteemed authors of Corrupt Illinois: Patronage, Cronyism, and Criminality, shed light on the political fraudulency characteristic of the Chicagoland area. The two colleagues vary in their professional background, providing a diverse and insightful view on such  a controversial topic. Dr. Dick Simpson, currently a professor in the Department of Political Science at the University of Illinois at Chicago, has a wide variety of experiences, including his former positions as a Chicago Alderman, congressional candidate, and author. On the other hand, Thomas J. Gradels also contributes with his extensive knowledge of politics as a former media consultant and current freelance writer and political researcher.

Time and time again throughout history, citizens of Illinois have witnessed corruption not only in the Chicago area but also its more than 60 surrounding suburbs that have been found guilty. Beginning as early as 1856, to the most recent face of Illinois corruption, Rob Blagojevich, the immoral taking advantage of political authority is undoubtedly a recurring theme. Simpson and Gradel explain it is due to this pattern, that Chicago is ranked as the most corrupt city in the country, and Illinois as the the third most corrupt state. It is found in all levels of public officials: out of the last nine state governors, four have gone to jail, and since 1973, thirty three Chicago aldermen have also been sent to jail for corruption. The root cause of all this crooked political environment? Decades of political machines. 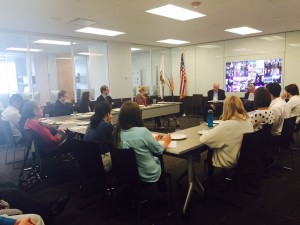 Simpson and Gradel emphasize that as long as machine politics survives in Chicago, it is inevitable the corruption will as well. The future of Illinois government lies in our hands as citizens. Although the task is intimidating, the two remain confident, explaining a “culture created over a history, can be changed over a history.” To bring about an end to these notorious political machines, they  propose an 8-step program to be implemented on all levels of politics. This program outlines key demands, such as the increase of transparency and accountability in public offices, implementation of inspector general in the suburbs, initiation of civic engagement programs in schools, adoption of public funding for campaigns, selection of better public officials, and modification of how political districts are remapped.

After the discussion, members of the audience brought up intriguing questions regarding what characteristics we should require from our elected officials,  techniques to promote public engagement, and current political representatives we can look to for examples of good ethical leadership. The Niagara Foundation would like to thank Dr. Dick Simpson and Thomas J. Gradel for taking the time to share with us their insight on the corruption that is unfortunately so prevalent in our state’s history, and providing us with a pathway to help make a difference ourselves.