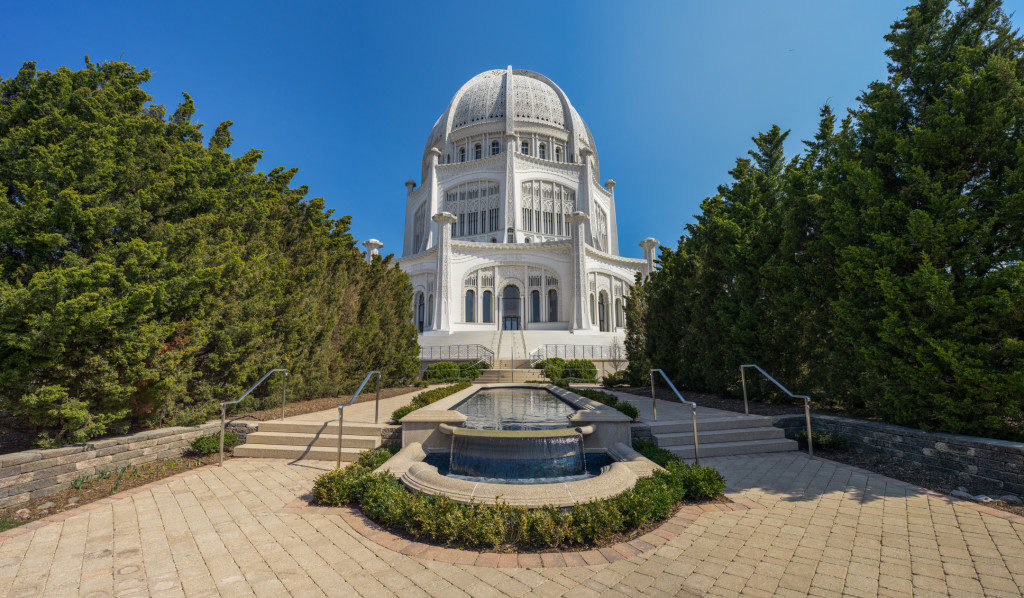 What does the equality of men and women, the harmony of religion and science, and the universal education of all people have in common? They are all teachings that Bahá’u’lláh, the prophet of the Bahá’í Faith, believed and taught through the texts he wrote and handed down to his followers. Last week’s event concluded the Light of Unity festival. It was a 9-week celebration of the 200-year anniversary of the birth of Bahá’u’lláh—alongside other celebrations happening worldwide. The festival was hosted by the Bahá’í House of Worship for North America in Wilmette, Illinois. It included a 30-minute service, an informational slideshow, and a movie called “Light to the World”—dedicated to Bahá’u’lláh’s life and teachings.

While many Bahá’í’s rejoiced over the last 9 weeks, some say they are concerned today’s society often contradicts the teachings of the faith. Hasti Movafaghi, a Bahá’í involved in the local community, says she began a journey for knowledge when she became a Bahá’í at age fifteen.

“For me this meant first grounding myself in the faith, which became harder as I grew older and I found more and more contradictions with what society is telling youth they should be doing versus what Bahá’u’lláh and `Abdu’l-Bahá teach,” said Movafaghi.

Movafaghi is not the only one concerned. The National Spiritual Assembly of the Bahá’í’s of the United States wrote a collective statement that was issued to the American Bahá’í community which addressed these issues.

It says, “At this pivotal juncture in our nation’s history, our foremost responsibility is to affirm everywhere ―in the Name of Bahá’u’lláh―the truth of the oneness of humanity in a manner that will have an impact for decades to come. We must accelerate our efforts to remove the stains of prejudice and injustice from the fabric of our society.” It continues: “The tensions, divisions, and injustices that currently beset America are symptoms of a longstanding illness. The nation is afflicted with a deep spiritual disorder, manifest in rampant materialism, widespread moral decay, and a deeply ingrained racial prejudice. As a result, millions of our fellow Americans, subject to systemic injustices in many facets of life, are prevented from making their full contributions to society and of partaking fully in its benefits.”

Bahá’í National Center employee Rebecca Rice says while the Bahá’í Temple has created many activities and programs aimed at addressing these issues, the faith has always strived to bring people together from all faiths and paths to serve humanity.

“Say, we should eliminate all racial prejudice. You can’t just flip a switch and it happens,” said Rice. “It is a process that occurs through getting to know and understand one another as friends and family. Coming together regularly to study and consult transforms our hearts and minds enabling us to open to one another. Then from our learning, we can determine what actions we can take together in our communities to establish programs and practices based on these principles in our lives, our communities and organizations. There is no one way it looks, but it’s this idea of building a unified, inclusive, and diverse community infused with these spiritual teachings.”

Movafaghi says she has high hopes for humanity.
“How will peace be gained? Through the realization that we are one, every man no matter what race or religion or gender or anything is part of one great civilization,” said Movafaghi.

She says this was simple to understand as a child in Bahá’í school, but it is hard to achieve. However, she says the greatest change begins at the most fundamental levels. If we make change within ourselves, then the family, then the neighborhood, community, state, country, and finally the whole world will be affected by the light of Truth.

Disclaimer The views and opinions expressed in this article are those of the authors and do not necessarily reflect the official policy or position of the Niagara Foundation.