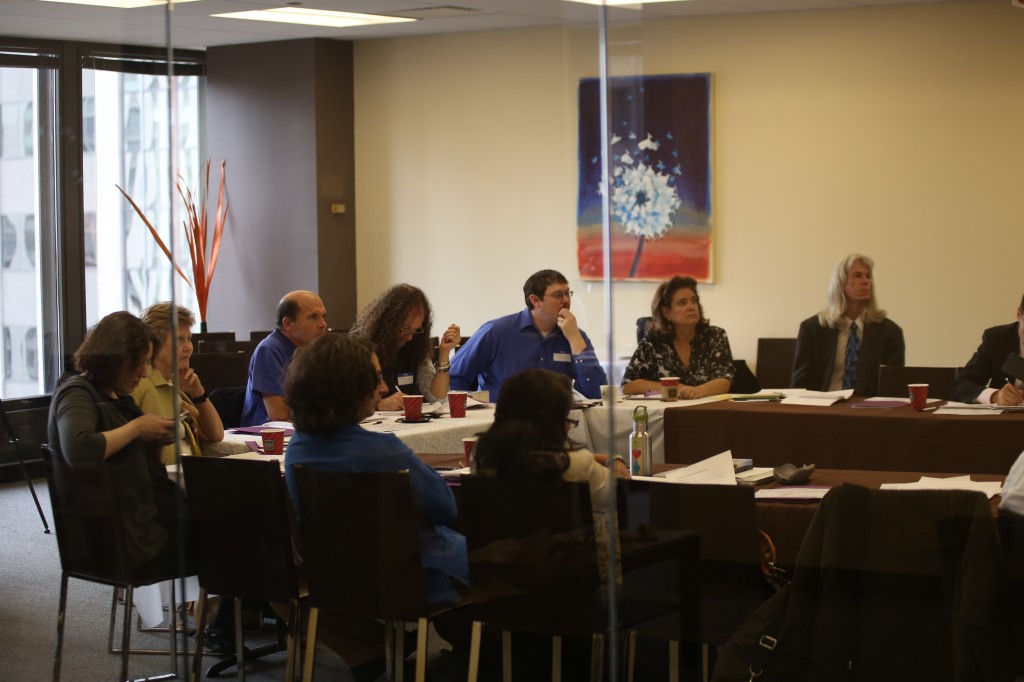 By: Alexis O’Connor, Intern at Niagara and Student at Northwestern

On Nov. 15, participants in the 2013 Study Turkiye curriculum development program congregated at the Niagara Foundation to discuss the influence the program had in their classrooms. Study Turkiye gives local professors the opportunity to travel to Turkey and explore the history and culture of the country. Niagara Foundation introduced this program in 2011 to assist professors in exploring Turkey’s pivotal role in the global community. Numerous professors shared their new techniques and information they have integrated in their curriculum since the trip.

Marc Healy, a professor of anthropology and human geography at Elgin Community College, discussed geographic perspectives and cultural landscapes in Turkey. Although Healy’s class focuses on current events, he believes one must have an understanding of recent history to gain a full perspective. Turkey’s central location between Africa, Asia and Europe has defined much of its history. The centrality and use of waterways has made Turkey a center point of trade and communication. The multitude of shared geographical sacred spaces has also created a center point of interfaith dialogue.

Shamili Sandiford, a specialist in environmental biology, discussed the relation between agriculture systems in Turkey and America. Beginning with two videos discussing agricultural challenges, her class focuses on comparative analyses and concepts of environmental biology. Her class then relates these videos to other real-world examples, such as the agricultural challenges and responses in Turkey and the U.S. According to Sandiford, the U.S. is considered a developed nation and Turkey is an advanced developing nation. By examining variables such as demographics, quality of life, and sustainability, her students can compare the agricultural situation in countries with different levels of development.

Mark Torgerson, a professor of religious studies, detailed his plan to include how Islam is integrated in Turkish culture. In his class, students are given an image of Islamic architecture and asked to describe what they see and what they wonder. This exercise encourages curiosity and promotes making connections to other religious art and architecture. In particular, Torgerson describes the composition of mosques because many of his students have not had the opportunity to explore one. His use of personal pictures from the Study Turkiye trip allows him to give insight from his own perspective and travels.

Deborah Adelman described her method of incorporating Turkish cinema into her film class. She emphasized the importance of world cinema in her class because it breaks down stereotypes and broadens her students’ film-viewing repertoire. Two Turkish movies she has considered adding are Yol and Bliss. She was especially attracted to these Turkish movies because of their ability to express Turkey’s national culture in the film industry. Although she begins with a focus on Hollywood narratives, she uses world cinema, such as Bliss, to complicate the Hollywood notions of clarity, unity, goal-oriented characters and closure.

Edward Hazelgrove focused on how his trip to Turkey has broadened his perspective on teaching the historical background to Homer’s Iliad. Since his time in Turkey, Hazelgrove has recognized more consistent infusions of historic fidelity in the study of the Iliad. Instead of allowing students to view the epic poem purely as a dramatic action-packed tale, he strives to explore the connections between history and culture. Especially with veteran students, Hazelgrove seeks to establish a correlation between modern and ancient wars.  Hazelgrove uses his photographs of Troy, taken on his trip to Turkey, to show his classes that these places mentioned in the Iliad really exist.

Jennifer Hereth was inspired to further her students’ knowledge of Islamic art, mosaic and fresco after her Study Turkiye experience. While on the trip, Hereth connected with a young Turkish artist who is curating a co-op exhibition. She also was able to explore the art of the Blue Mosque and Hagia Sofia, as well as examine prayer rugs and mosaic pieces. She uses her personal experiences in Turkey to encourage students to travel and experience cultural art on an intimate level. As an artist, she reflects on what interests her within a culture and how to express that part of the culture as art. Recently, Hereth brought her students on a field trip to study mosaics.

Branden McCullough discussed the contents of his class on the history of the Ottoman Empire. Beginning with the initial Arab expansion, McCullough traces the rise and fall of subsequent powers through the empire’s ultimate decline. After attending a lecture while on the Study Turkiye trip, he learned more information about stages of power and expansion in the Ottoman Empire. Adapted from the same lecture in Turkey, McCullough incorporated three major influences on Turkish/Ottoman culture into his class: Turkish traditional culture, Islamic law and history, and Byzantine customs. He also integrates primary source documents into the reading for his course that will deepen the conversation of each lecture.

Ty Liles detailed his view of Turkey from a geographical perspective. As a professor, Liles realized that many of his students did not know the location of Turkey. Sense of place, which is of crucial importance, is especially prominent in the discussion of Turkey. Its position as an East-West oriented country affects much of its culture and connections. Liles uses his personal experiences travelling in order to connect his students intimately with places and people they otherwise would not have an opportunity to explore. In class, Liles uses broad geographical terms, such as population pyramid and political geography, and applies them to the case of Turkey. His application of such terms allows students to conceptualize these topics in a real-world situation.

The Study Turkiye Program allows faculty to expand their curriculum to include an understanding of Turkey in a historical, political, religious and cultural range of topics. Niagara Foundation created this program with cross-cultural dialogue and interfaith understanding in mind. It promotes the facilitation of education and acceptance through personal exploration. As a unique country tied to a multitude of cultures and religions, Turkey is a microcosm of the complex societal relationships that Niagara Foundation strives to connect.