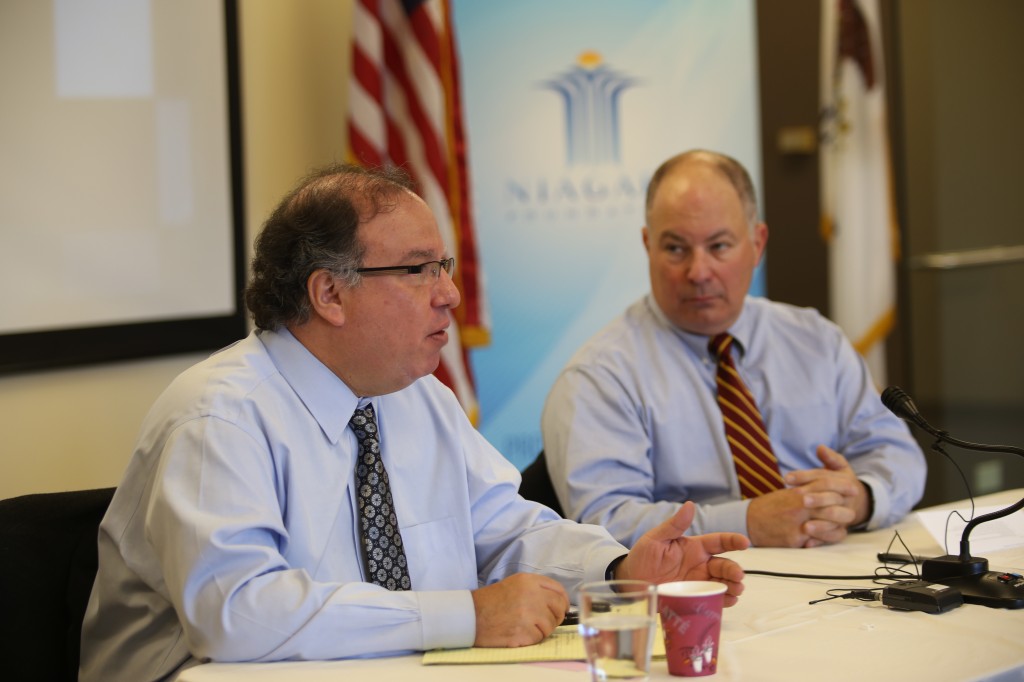 by Eleanor Peck, Director of Communications and Member Relations

On October 24th, the Niagara Foundation was happy to invite two law school deans, Daniel Rodriguez of Northwestern Law School and David Yellen of Loyola Law School to speak about the crisis and transformation of legal education. According to Yellen, “the last five years have been the most dramatic slash traumatic in the history of legal education in this country.” The deans spoke about three topics all of which are pertinent issues regarding legal education.

First, there are the pipeline problems that law schools are encountering – everything from the decreasing enrollment to the jobs new lawyers are able to get after graduation. According to Yellen, 25 new law schools have opened up in the past 20 years. That is pretty dramatic growth, however, Yellen and Rodriguez were not worried because, “we’re a law heavy country…but there’s no doubt in the past five years the job market for our graduates has been squeezed tightly.” As Yellen said, “it’s no longer controversial that there is a significant gap between good jobs and graduates.”

In referencing a controversial study that said law school was a good investment over a lifetime, Rodriguez pointed out that “Any study about the value of law school does not purport to answer the question for an individual of whether law school is worth it for them based the choices they have, on the school they get into” or their economic situation.

As to how law schools have reacted to the “Great Recession” and the controversy over legal education, Yellen says,“The market has responded very vigorously.”  There were about 40,000 law school applicants last year, a significant decrease from five years ago and surprising given that “40,000 law students is also the number we had 30 years ago.” Yellen says, “I’m personally more comfortable with that number… We both decreased the size of our student body this year.” But this decision was not altruistic – it’s important for the schools to keep their ratings high and lowering the pool of applicants would decrease the ratings. So, in the long term, it is better for the school to have a smaller class, which as Rodriguez said, “blows a hole in your budget” rather than lower the rankings for years to come. The two deans agreed, “It’s arguable that because of the negative publicity, the market correction has been more than it should have been.”

Regarding cost, the problems are parallel to what has happened in all of higher education. “Tuition was constantly going up in excess of the rate of inflation. If you look over 25 years, tuition at private law schools went up two and a half times the rate of inflation” according to Yellen, during that time. Rodriguez continued, “Most law students graduate with an average of over $100,000 in debt and that is just law school debt, on top of undergrad debt.”

According to Yellen, , “In an economic sense, not in a fairness sense, higher education was underpriced 25 years ago.” He continued,, “I like to put it that for decades, higher education exercised self restraint, we could charge more but it didn’t seem right. Then we entered an era with much more competition.” After a brief moment of amazement that they had made it that far into the forum without discussing the US News and World Report rankings, he said the impact of those rankings is hard to overstate. “Neither Dan [Rodriguez] nor I are obsessed with the rankings, but it’s an important part of the world we operate in.”

Another big change in the past 25 years is the dramatic increase in stated tuition.  Interestingly, so has the availability of scholarship money. There’s been a big change from need-based to merit-based aid. Instead of money being given to those whose economic situations requires it, scholarships are given to students who have high LSAT and GPA scores. Yellen thinks this is explainable, but problematic, “it’s led to the shrinking of need based aid, which is a loss for diversity.” Another problem is, “we’ve paid for merit based aid through increases in tuition. This means students who aren’t getting aid are subsidizing those who are.” The very people who are going to have weakest job prospects once they graduate (those who do not receive merit based aid) are paying that much more than they would in a world without this type of aid.

Rodriguez didn’t disagree fundamentally with Yellen on this point, but thinks merit based aid has a place if the criteria for the best and brightest are not based solely on LSAT scores and GPAs. Rodriguez believes “deployment of high merit should be broad and eclectic to … include high achieving students measured by diversity in order to enhance the well being of the class.” Both deans believe that law schools need to be more attentive to the problems of students in need. Yellen finished by saying, “the cost crisis in all of higher education is deep, troubling, there are no good solutions, and time will tell what solutions impact cost.”

The third and final problem discussed was the nature and quality of legal education itself. Today, law schools pay much more attention to what the real world tells them is necessary. Smaller teamwork building classes, clinics and simulations are all a part of the way that law schools are emphasizing experience rather than esoteric research and lectures. Yellen emphasized that “we’re nowhere near medical school in terms of real life experience, but medical school is subsidized heavily by the federal government in a way that makes that possible.”

Rodriguez stressed the importance of acknowledging that the new real world lessons are more expensive than just having students sit in a lecture, thus reinforcing the dilemma of how to get costs under control.

Bringing up the idea that gained traction when President Obama “waded into it with both legs,” Rodriguez thinks making law school two years instead of three is a bad idea. He said he has never spoken to a lawyer who said, “you know the problem with law school? Students are over trained when they get out!”

As an alternative to the two-year solution, David Yellen brought up an idea Washington has already implemented, Limited Licensed Legal technicians – people with less than a JD can be licensed to do some, but not all the things that lawyers can do. With one or two years of training you can do uncontested divorces, housing court, and real estate closings – These technicians are “equivalent to nurse practitioners and are the real way to enhance access to justice for lower income people. Rodriguez countered this idea by saying it would only “sweep the country, “ as Yellen had suggested, “over the dead bodies of thousands of lawyers.”

The deans closed the forum by confirming that the issues facing legal education are not unlike the issues facing higher education in general. Both Rodriguez and Yellen believe that their  department is a canary in the coalmine for university education. However, law schools are actively doing things to make these problems better for students, faculty and the legal profession.