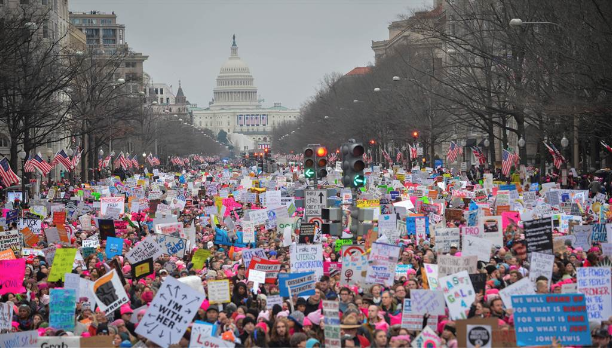 Protests as a Form of Spirituality
By: Marlen Garcia, Interfaith Engagement intern

“Hey, hey, ho, ho! All the hate has got to go!” Walking down Michigan Avenue, I
became inspired by the unity of people. Thousands of people from different backgrounds were
marching together. There were signs for immigration, the Dakota pipeline, and LGTBQ rights.
There was a sense of unity. It allowed everyone to feel hopeful after the elections. The recent
Women’s March on January 20th made me think about my experience at last year’s march. I
began to think about all the positive energy I felt from everyone around me. It was a spiritual
moment.

Spirituality is defined as “appreciating all that exists, coping with human suffering, and
being open to new perspectives” (Ann Suppes, Wells 2013:150) Protests are not only a form of
unity, but they are also a form of meditation and prayer. They hope to bring about change. As I
mentioned before, going to the Women’s March made me feel hopeful for a better future. This
allowed me to feel happiness. The women’s march had a diverse group of people all marching
for change. Everyone was welcoming and supporting of all the different causes. We were coping
with the suffering of the election. People were very unhopeful, but the protest made me feel like
everything was going to be alright.

Protests come in different forms, but they all resemble a form of spirituality. As John
Halstead argues, “There’s the chanting that is common to both political demonstrations and
many religious rituals.  Even the physical act of marching or walking itself can resemble a kind
mini-pilgrimage or walking meditation.” The act of protesting conveys a spiritual act because
people march together to support each other in the fight for change. It is a peaceful protest that
allows individuals to feel interconnectedness. They are hoping and asking for better laws or
better treatment, so marching together gives them more inner strength to fight for change.

When people protest, it is because they feel wronged and pain toward a cause, so the act
of protesting allows them to heal. It gives them power over themselves and over the community.
As Halstead mentions, the power is not the typical hieratical power, but rather “power which
arises from our being a part of a larger whole. It arises from our connections with and
compassion for others.” It is power that is built through unity. It is a form or resisting and
healing. Although demonstrators may not praying to a God, they are chanting together to make a
difference in their lives. They are inquiring change toward women’s right or the LGTBQ
community. Protests are a form of praying and healing.

Although some may not agree that protests can be spiritual events, I believe that it is a
way to join different people. They share similar fears and concern. They laugh and walk
together. It allows individuals to feel optimistic. At the Women’s March, I remember walking
down Michigan Avenue feeling hopeful. I felt at harmony and contentment. The ray of sun shine
made me feel warm inside. At that moment, I knew together we could be unstoppable.