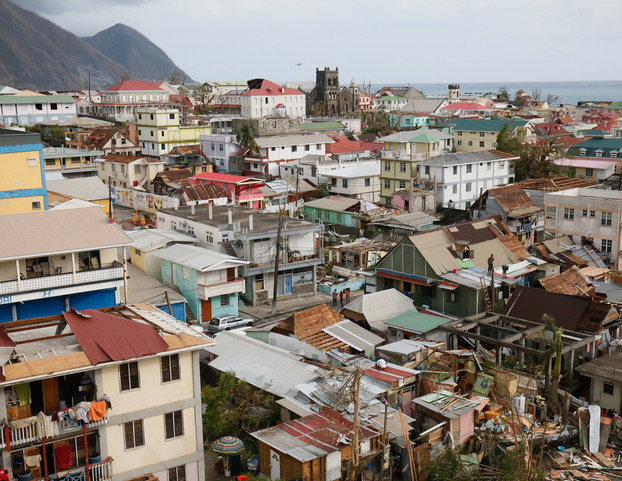 Torn power lines, destroyed homes, and lost lives. Many states have been damaged by Hurricane Harvey, Irma, Maria, and now Nate. While these storms have now dissipated, some relief efforts are just getting started. That is why organizations like American Red Cross of Chicago & Northern Illinois send volunteers to affected areas to provide hurricane disaster relief.
Red Cross Volunteer Steve Wise went to help in Dallas, Texas—in which state officials say 82 people died and $180 billion dollars of damage was caused because of Hurricane Harvey. He says he could not believe some of the stories he encountered.
“We did have a lady that gave birth,” said Wise. “Mother Nature said, ‘okay now is the time for the baby to come.’ So they put her on an ambulance and took her to a local hospital and she gave birth.” The Hurricane Harvey volunteer says this was just one story he encountered out of many while working at the Kay-Bailey Hutchinson Convention Center mega-shelter in Dallas. He says he heard stories of fish and snakes swimming through flooded homes. He heard stories of boats rescuing people. He heard stories of buses driving and planes flying people to the mega shelter when other shelters were full. He heard stories of people bringing garbage bags of essentials with them—usually clothing or baby items.
Texas was not the only devastated place. Christian humanitarian organization World Vision says Hurricane Maria hit Puerto Rico and destroyed thousands of homes—leaving 45 people dead. San Juan’s mayor Carmen Yulin says there is a humanitarian crisis unfolding there. Governor Ricardo Rosselló says the island is essentially devastated—its power infrastructure destroyed, its housing infrastructure severely hurt, and its food and water resources limited. CNN says Hurricane Nate—the most recent hurricane—left 28 people dead throughout Costa Rica, Honduras, and Nicaragua. The storm made landfall in Louisiana and Mississippi over the weekend—with no deaths reported.
American Red Cross of Chicago & Northern Illinois Regional Spokesperson Catherine Rabenstine said she visited Florida and the Florida Keys in the aftermath of Hurricane Irma—a storm which CNN says left 61 people dead—and leaves 10,000 people still displaced. She says people were really struggling to recover.
“These storms have wreaked havoc on systems. They’ve wreaked havoc on power systems, electricity, food systems, the supply chain—so people are in some cases struggling to even get cell service or electricity or water,” said Rabenstine. She says this is why American Red Cross goes to where storms will hit ahead of time. This way the organization can prepare and open shelters when they are needed. The organization then provides food, lodging, comfort, health, and other assistance for those immediately affected by these hurricanes. However, she says people often need something more to put their lives back together after the devastation.
“The Red Cross opens up individual cases with people affected by disasters—to help people work through long term recovery plans—to help people figure out who to call for different resources. This kind of disaster response isn’t taken care of by one organization. It’s handled by many organizations—including local community and faith based organizations,” said Rabenstine.
Wise says he wants to help those in need, no matter how far away they are.
“When you look at someone who goes through this, you can see the hurt,” said Wise. “To see that go away—and their tears go away, and put smiles on their faces, and help them get back home—was a very rewarding opportunity.” The retired worker says he had a very fruitful career. He says he told his wife that he wanted to retire early so he can help others—sharing his blessings with others who need it.

Photo credits:
Title: A view of Roseau, the capital of the Caribbean island of Dominica, seen from the window of a government building the day after Hurricane Maria struck.
Author: UK Department for International Development – https://www.gov.uk/government/organisations/department-for-international-development
Source: https://tinyurl.com/y9p2zjsa
License: CC BY 2.0 – https://creativecommons.org/licenses/by/2.0/
Modified: Cropped